Cape Reinga, New Zealand: The Race to the Top

Another road trip, another destination! North, instead of south this time. I team up again with Hans and with the addition of two great friends; Lulu and Chey. And this time it’s not our physical endurance that will be tested, instead it is an epic struggle between Time and Ambition!

With Hans leaving New Zealand in a month we wanted to travel together once more and get to see more of the country. But lets not fool anyone here, we don’t really need an excuse to travel.

Our preparation for this trip mainly revolved around hawking the weather forecast. We were hoping on some good early summer weather and gambled between two weekends. Picking the best one was a waiting game until the point of no return. This probably resulted in a lack of further preparations, like booking accommodation and spotting great places to visit, but once the decision was made we could not be stopped.

If you’re going up north (from Auckland) there are a few obvious main attractions that you kinda have to see, like the Bay of Islands, 90 mile beach and Cape Reinga. But we also fancied a bit of ‘off the beaten path’ traveling. Places that are not travelled by every other tourist on their way to Cape Reinga, which is the most northern point of NZ and a popular destination. To find these places, though, you need to properly prepare. Which we didn’t really do additionally to limitation of only 48 hours to get everywhere and back.

We opted for a slightly bigger vehicle than the usual cheapest pick. Because we were with more people, traveling windy roads, doing some off road adventure and a lot of driving ahead of us this became a smart choice. And so we ended up with Korea’s finest; the Ssangyong Korando …

The First
We left at the rise of dawn, picking up the rental at 8am sharp. We signed the necessary paperwork, did some preliminary checks and paid the mandatory bills before we left Auckland without hesitation.

After about an hour we arrived at fellow Dutchies Lucie & Marius, who were living just outside of Hellensville. Lucie & Marius are family friends of Hans and this would be his goodbye visit. Before he came to NZ he had never met them, but he quickly found a surrogate family in them. We too were warmly welcomed with home made cookies and cake and unanimously agreed that they had the most wonderful home with an amazing view on the green hills that surrounded them. They had found their little paradise.

After the tea and coffee we were off again, heading for the Bay of Islands. These are basically a bunch of islands off of the east coast of NZ and there is great deal of activities you can do. From deep sea- to sky high diving, from spotting dolphins to spotting birds on protected islands. But these things are costly and we were on a budget. So we were wondering what was out there that would be free, fun and beautiful.

In the spur of the moment we decide to pull the brakes and have lunch on a nice beach we pass. With the sun out it would be a waste not to do so.

Getting closer to day one’s destination Paihia we figured we could do some scenic driving by taking a ferry to Russel, NZ former capital city, and looping back to Paihia by taking some back roads.

Russell might be the former capital but it is nothing like one. Although it has a lot of character with its cozy boulevard and historic buildings, Russell is very small and slightly isolated from the rest of the world. We take the opportunity to visit some nice viewpoints further up on the peninsula before we head back by taking the back roads instead of the ferry.

Traveling the gravel roads exposed us to some lush and tropical parts of the area. Undone from most civilisation and with some great views along the way it lifted our spirits. 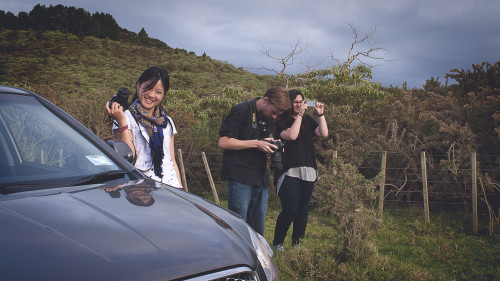 By now the sun was setting and we had yet to find a place to stay the night. Our hopes of finding something was slammed when we arrived at Paihia. Every motel and backpacker we passed flicked us a ‘No Vacancy’ sign. The long labour day weekend attracted quite the crowd. We had no choice other then to look outside of town.

We found our luck at a motel/campground that had one simple batch left for us to book. The owner was so helpful that she even gave us a discount of $30! Thank you very much, yes please!

As if the world isn’t big enough it appeared we just took the last beds from two other Dutch travellers. We offered to share our room with them, as we have 3 spare beds, and saved them the trouble of searching for a place till the middle of the night to stay.

The Last
Another early rise on what is already our last day of the road trip! One weekend is to short!! But we have nothing to be sad about just yet. Its another clear blue sky and a big day ahead of us so our spirits are high!

We all take a miserable camping-style shower, check out and properly wake up at the nearest coffee place. Today is going to be an epicly long day in the car, but if we can make our schedule it will all be worth it!

Our first stop, after an hour of driving or so, is the start of 90 mile beach. But not simply a beach, it’s also a state highway and a if necessary a landing strip. Pretty awesome beach, huh?! Now, it seemed a lot of fun to us to drive this highway for a bit, but we were also warned for the many hazards that came with that. Tides are an issue, as you can get trapped. Then there is getting on and off the beach. The wet sand part is great to drive on but before you get to that part you’ll have to cross that dry and very loose sand part. And that’s where many vehicles get instantly stuck. And once you’re on, you are on for the full ride, there are no exits. Last but not least is the fact that our insurance will not cover anything that happens on the beach, regardless of 90 mile beach being a state highway…

It didn’t help either that the first vehicle we spot is a van that got stuck just 3 meters from the beach access. Floating there hopelessly on a solid layer of sand. But regardless, the rebels we are, we decide to go for it. We plot out the best route, and with a healthy dose of nervousness we take a leap of faith. And we make it! Not so hard after all…

Now the fun begins. Officially all road rules still apply, but not really to us! We take the car for a spin, burnouts, donuts and 180s. And boy… it’s a lot of fun! Most of us never drove on a beach before, some hardly ever drove a car before, and then we also had Lulu… But the freedom was amazing. It took a long long time for those smiles to come down.

A bit later, with the high tide moving in, we decide to leave the beach and drive the last stretch of road all the way to the top, which is a nice drive with some great views along the way. Mostly green hills and farm land.

Occasionally we stop for a nice photo opportunity or an ice cream. But we get to Cape Reinga fairly fast. We park the car and walk the last few hundred meters to the light house, which marks the Northest point of NZ and it’s also the place we two sea’s meet each other. And although the whole thing is a bit touristy and busy it is a nice view and something that you kinda have to see when around.

Not far back are the Great Sand Dunes and something that makes for a surreal sight. Between some green forrest and the ocean there is a patch of ginormous dunes. New Zealand truly has it all!

The dunes are fun distraction as you can climb them and sand board down. We ended up not doing the boarding, but we did meandered around for a bit. Taking some photo’s and relaxing a bit before we would start the long return trip to Auckland.

Once we got back to the car it was about 4pm. We decided to hurry ourselves a little bit to try and make the sunset at the Keri Keri peninsula. Along the way we did got distracted by a little abandoned house in the middle of a field.

That didn’t made the challenge much easier, but regardless we made it just in time to catch one of the most remarkable sunsets we had seen so far.

It was a perfect end to a perfect road trip with the perfect people. It had been an race of 1.000km and a challenge to visit all the things we wanted to see. But it was so worth the effort. We were tired but satisfied and couldn’t wait to look at the many photo’s and video’s we had made to re-live the whole experience again.

Now we just had to to get home still. Another 6 hours driving!