NZ In One Day: Dying By The River

New Zealanders (or Kiwi’s) are a little bit different from us, the Dutch. Kiwi’s grow up around vast open land, beautiful mountains and lots of outdoor adventures. Their country is the size of the UK but only holds 4 million people. They love their beaches, their BBQ’s, their freedom and their nature. They are proud of it. And it makes them down to earth, relaxed, friendly, liberal and tolerant. That’s why I like it here, a big country with a small town feel to it. So when a Kiwi goes on an adventure it is nothing like what we are used to in the old country.

I wake up from my flatmate, Chey, knocking on my door. My buddy Luke and his friends were about to leave on their Hutt River adventure and wanted to know if I was in. Something he mentioned the other day and sounded like a good idea to me at the time. But right now I feel more like a few more hours of sleep. A quick peek through the curtains make me change my mind though as it is a beautiful sunny day. Choice!

I had no clue what to expect, all I know is that they walked up the Hutt River a few weeks ago and decided to go down the river with little rafts. Luke is texting me some cryptic instructions. We’ll be meeting up at Upper Hutt, about an hour drive from my home, and I should get a $20 inflatable raft from the Warehouse once I get there. But first I grab a nut bar and swimming trunks before I jump into my car. Gotta go prepared!

While I wait for the rest of the group to arrive at Upper Hutt I go into the Warehouse to buy the raft only to be disappointed that they don’t sell it at this particular store. With no other choice I opt for an $8 inflatable inner tube instead. The best I could do at this point. 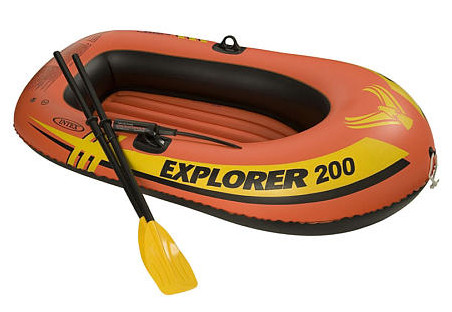 Back at the parking the guys finally arrived and I get a good laugh for my silly inner tube gear. Not really a confidence booster, but it’ll have to do.

I follow the guys to a parking at the bottom of the Hutt River, this is where we will finish and where I will leave my car. I jump into the other car and we drive for another 15 minutes north where we will start our adventure.

At this point its about noon and the sun burning fiercely. We inflate our boats and my inner tube. We decide to leave our phones and valuables in the car because the chances of it getting wet was just to big.

Once we are ready to start our relaxing cruise down the river we get stopped by a father of two little kids. He points at the sign and asks ‘Are you guys planning on going down the river with those things?’. Excited we answer ‘Sure’. Then we read the sign ‘Dangerous Water Conditions’. Surely my local friends knew what we were up against, right? Then the guy continues ‘Last week an experienced kayaker had to be helicoptered out because he got stuck. It can get pretty rough. The problem is; once you’re on, you’re on for the full ride. You’ll be surrounded by mountains, with no roads out.’ Now, this did sounded like trouble to me but the guys laughed it of. It won’t come to that, the rafts are a lot smaller than a kayak. It’ll be fine. And surely it couldn’t be that bad right? The river looked so cute and calm. That sign was meant for the bad days, but not today. 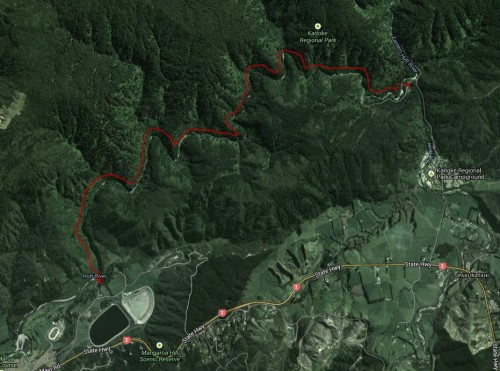 Floating in the water was a blessing. For the first bit the water was flowing calmly and we were screaming with joy. This is going to be amazing!

It didn’t take long for the first rapid to show up though. We could see it coming from afar. The river was getting more wavey and rocks were sticking out of the water. Nothing dangerous yet. We peddled to find the right path and slowly accelerated toward the actual rapid that had a little drop.

At this point we were all still trying to get into the ‘rafting’ mentality and figuring out what these inflatables were capable of. Being the only one on an inner tube I was letting the others, less vulnerable ones, go first so I could figure out my best course of action.

But the first signs of my bad choice of inflatable was starting to show with the first drop. Immediately I was thrown of my tube and went head under grasping for the surface while avoiding treacherous rocks. Luckily the guys ahead grabbed my tube as I walked ashore and we regrouped ourselves. 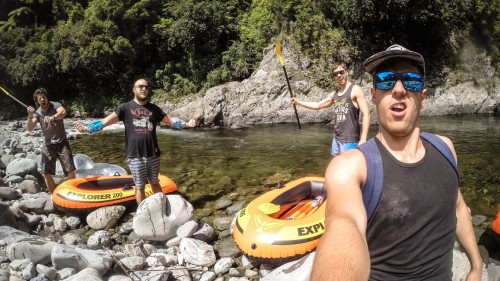 The next few hours are awesome. We float through beautiful unspoiled parts of the river and go down some cool rapids. Sometimes I even managed to pass them without falling of my little tube. The more I get the hang of it, the more fun I have. At this stage we are completely removed from the outside world. It is just us.

After 3 hours we take a break, eat our lunch, add some air to our boats and try to figure out where we roughly are. We think its not much further, but we can’t really tell. We brought one phone along, but the water resistant bag was 100% non-resistant and everything was soaking wet. The phone survived, but was no help as we were out of reception.

The more down we went, the rougher the river became. The rapids grew more aggressive each and every time. Some of the drops were getting so high that we couldn’t do them and we had to try and climb around them. This was not always easy. Most of the times the river had no banks, and we had to climb steep rock walls, with no shoes while carrying the boats. 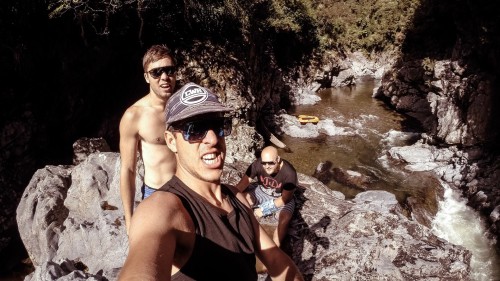 With the more aggressive river the risk of puncturing one of the boats became bigger as well and in the back of our minds our concerns were rising. It was a scenario we could not afford. Losing one boat would be disastrous. Walking the rest of the river was impossible, especially without shoes. It would simply mean we would be stuck. Every rapid was a reminder as it was becoming inevitable that you would hit your ass on a few rocks along the way, causing for the occasional cry of pain amongst our group.

My problems were becoming a little bigger too. More often then not I was thrown of my tube when going down the rapids. It was becoming frustrating and dangerous. I already had some nasty cuts on my arm and legs. It had also damaged my watch and I lost my Ray-Bans. Every time I fell off I had to fight the thousands of liters of water pushing me around. While trying to find my way up to the surface I also had to avoid kicking my legs into any big rocks. There were times I didn’t know which way was up, or when the water flow kept me underwater. Not to mention that every time I resurfaced I had to quickly figure out where my tube and belongings (which were becoming less which each rapid) where. Sometimes I had to run after it causing more bruises.

At one point, at a particularly strong drop, I got thrown off and got stuck in the middle of the river. The water coming down was pressing me against a rock and the only way out was crossing a very strong current. One of the guys actually had to return for me and pull me across.

But regardless of all the struggles, being surrounded by this pure act of beautiful nature was like a drug to our systems. We were like little kids on a playground. Running around screaming and laughing. And between te rapids, when we were just floating slowly down the river, you could here us yell ‘this is amazing!’. And it absolutely was. Taking these risks was being rewarded handsomely.

We were now 5 hours into what was expected to be a 4 hour trip and we were growing concerned about our progress. We still couldn’t figure out where we exactly we were. By now we had been in cold river water for 5 hours straight and none of us could stop our bodies from shaking . We were out of food and both my tube and Luke’s raft were losing air increasingly faster.

When it was 6pm at night the fun was wearing off. After each corner we were hoping to see the parking lot, or at least the point where the guys had walked to those few weeks ago. But every time it was a disappointment. I was growing so sick of being thrown of my tube, walking around rapids on my bare feet or having my feet being slammed into rocks that Luke was nice enough to switch inflatables.

At one of the breaks we actually started thinking of setting up camp and staying the night. We were losing daylight quickly and we still had no clue where abouts we actually were. But with no food, no way of making a fire and with wet clothes on our backs it wasn’t really an option. We just had to keep going, as fast as we could.

Being in a raft instead of a tube was a blessing. It was so much nicer, and going down the rapids was a breeze. Luke seemed to master the tube a bit better then I did and he went down the river fearlessly. But I just couldn’t get rid of the idea of someone getting injured.

It was this scream of intense pain and agony ahead of me from Luke that made my heart race. It is strange, but instantly you could hear from his voice that it was serious. As I got closer I could see him in the water, stuck, and just screaming out of pain. The only thing I could think of is that he had fallen of and horribly broken his leg on a rock.

Luckily it was a little less serious but not less painful. Luke had a terrible cramp in his leg and it was hurting him like hell. He couldn’t move and it took about 15 minutes for it to go away.

To make matters even worse not much later the inner tube ripped and became useless. By now we had been in the river for 7,5 hours and it was almost dark. We were not having fun anymore, we were cold and miserable, and the timing of losing an inflatable was the worst.

Nick was the only smart guy in the group to wear shoes and thermal clothing. He gave up his raft and start walking through the river as much as he could. By now the river was wider and less rough, which was giving us hope that we were getting closer to the end.

After almost 8 hours I finally could hear some cheering ahead of me. They had found the spot they walked to and not much further to the car park. Within half an hour we finally reached the end of a long day in the river. Now the cheerful mood was returning to us and we could see the adventure in it again. We made it, even though it took us 8 hours, or twice as long as expected.

The ride back was shocking, it was only 15 minutes by car, how did it ever take us 8 hours? It took me an hour long shower before I could stop shaking. The next two days I could hardly move and my feet were swollen from all the bruises. But it was all worth it. 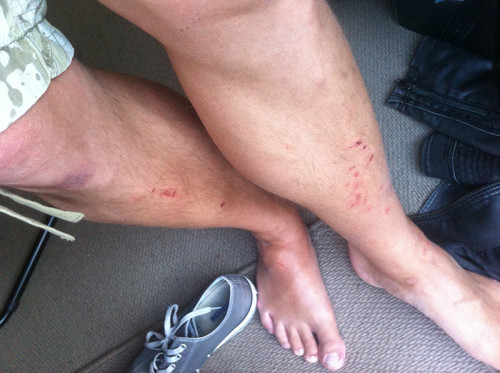